On YMCA AEF stationery (the first CMC used this) 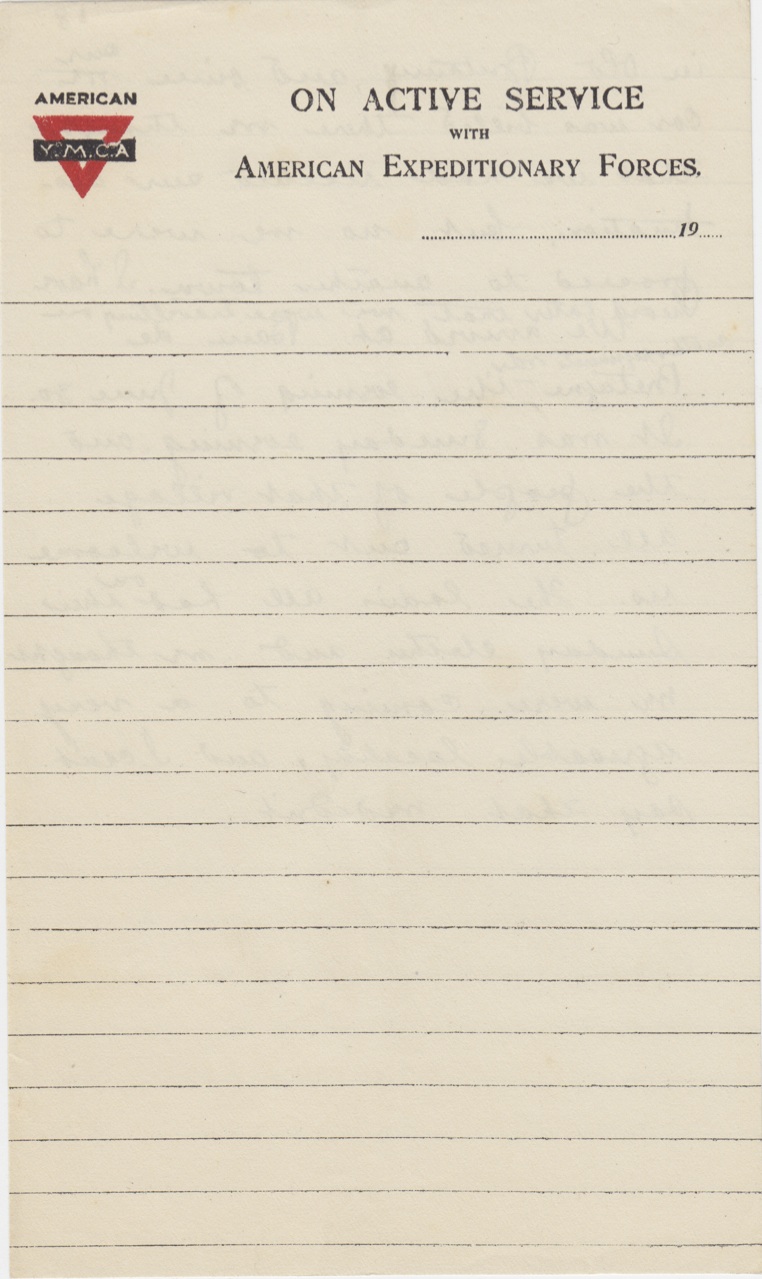 I had read many glowing articles in out current magazines about “On Board a Troop Ship” by some correspondent who occupied a stateroom. Oh, what dreams we had of a pleasant journey aboard., but oh, how they were shattered. We had hoped to aboard one of the larger ocean goers. We had visions of state rooms and berths. Visions of calm and peaceful ocean breeze, but never fear we changed our mind we changed our mode of thinking the minute we hit the gang plank for the Liecestershire. This was a british liner. [*]

I wondered how we were all going to board that ship. Certainly they would not treat us as sardines in a can. The stream of American humanity continued to

We all had our places assigned to us the evening of June eleventh. The ordinary civilian would laugh to see how we were crowed in that ship. We slept, ate and loafed in the same twelve nine square feet. The only thing that can be said in favor of such a condition is that everything was handy. That is everything was within reach.

Our allotted space in that ship, for eating, sleeping and loafing was what the average size man has in a home cemetery.

Our beds were the common ordinary hammocks. We hung these over the ceiling just above the tables. Backward and forward they went with each sway of the ship. These hammocks hung

in such a crowded that with every wave of the ship there would be a corresponding bump against the fellow trying to sleep next to you.

I could never symphathize so much with Noah and his animals on this troop ship. There was but little air to be had in our quarters below. Only an opening through the mid ship gave us air in our den beneath. I can’t see how all those animals lived with Noah for so long with so little air.

True there were port holes in the side of our ship but we did not dare open them since the water would dash through with every waft of the wind or every heave of the steamer.

Just before we left to aboard our ship red Cross representatives passed about cards which we were to properly fill out, and have sent direct home as soon as we landed safely overseas. I have often wondered how these Red Cross representatives knew that we were going to land safely. Perhaps they got it over the wires. These reposts were always sent to our people before we crossed the Channel.

As we streamed out of our American port the morning of June 12th all were as quiet as a mouse. Orders had been given to allow no one on deck while we were leaving the harbor. Not a

* LEICESTERSHIRE (1) was built in 1909 by Harland & Wolff at Belfast with a tonnage of 8059grt, a length of 467ft 2in, a beam of 54ft 2in and a service speed of 15 knots. Launched on 3rd June 1909 and delivered on 11th September she made her maiden voyage from Birkenhead to Rangoon. In August 1914 she was requisitioned for trooping for the Indian Expeditionary Force and carried Indian and Burmese troops to the Persian Gulf before reverting to Bibby services in the following November. She was taken over under the Liner Requisition Scheme in March 1917 and served on the North Atlantic [my color] although two voyages were made for Bibby’s during that time. In 1918 she carried troops to North Russia to assist the White Russians before repatriating Australian soldiers. She was refurbished by her builders in 1919 during which time she was converted to oil burning. As with all conversions to oil the coal bunker forward of the funnel was converted into cargo space and derrick posts fitted to serve the hatch. In 1930 she was sold to the British National Exhibition Ship Co., renamed British Exhibitor, and refurbished for her new role by Cammell Laird & Co. of Birkenhead at a cost of £100,000. When the slump hit her owners went into voluntary liquidation in February 1932 and she was laid up at Southampton for a year. On 28th September 1933 she was purchased by the Cairo based Egyptian Company for Transport & Navigation and, as the Zam Zam, was deployed on their Egypt to Jeddah service. In May 1934 she was transferred to Societe Misr de Navigation of Alexandria without a change of name. Laid up at Suez in October 1939 she resumed service on the Alexandria – Cape Town – New York service in February 1941. On 21st March 1941 she left New York bound for Recife where she embarked 202 passengers and sailed on 9th April. At 0545 on 17th April, although a neutral, she was hit by 55 shells fired by the German raider Atlantis in ten minutes during which around 24 lives were lost. Seven hours later she was sunk with three bombs along the waterline. The survivors were taken aboard the Dresden which proceeded to St. Jean de Luz. It later transpired that the commander of the Atlantis, Bernhard Rogge, recognised her as a Bibby ship and decided that she was disguised as a troopship. (Photo: Bibby Line Group)