The Fighting Near Marre. 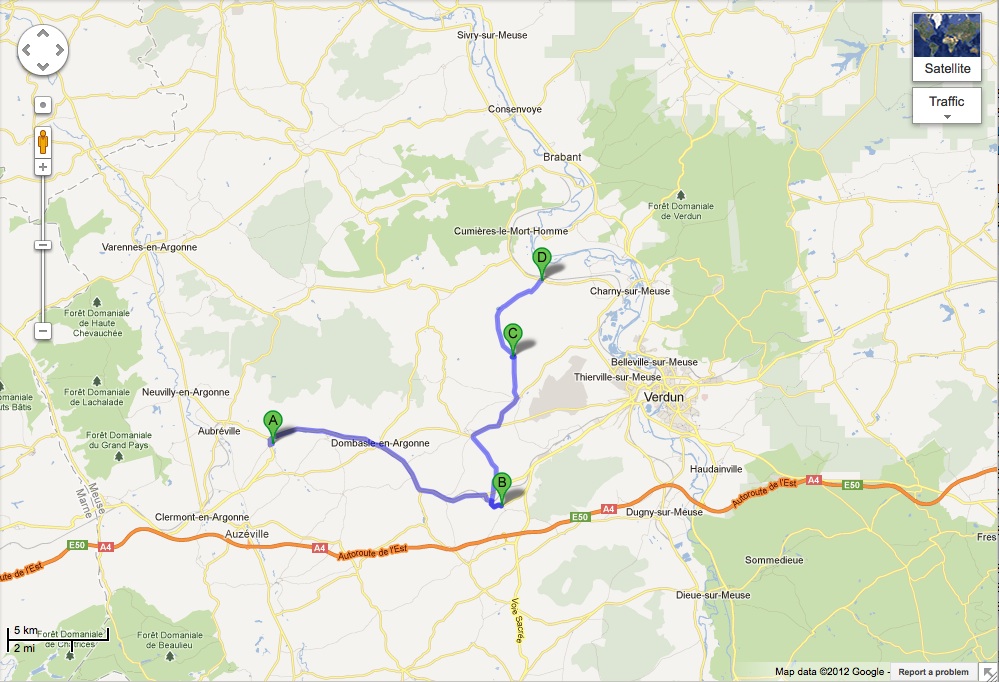 [note: I have no idea what CMC’s actual route was. MSC]

Just before leaving the neighborhood of our first visit to the front, my companions and I were introduced to a new army custom. We had been taught throughout our army training that we should not steal from the other fellows. My pals and I had all of our extra clothing stored in a little box and carelessly, we left this box in the open. Consequently the next morning when we went to look after our belongings, we discovered that someone had use an ax and torn the box open and pinched everything that they possibly could. Some infantry boys had returned from the front that night and I suppose they needed the stuff. We did not particularly care since it relieved us of considerable extra stuff that we did not need. We soon learned that we must discard everything that we did not need.

Our help being no longer needed near Parois we moved to a position along the Meuse River and canal,

near the towns of Charny and Marre—many kilometers distant. We first went from Parois to a French camp near Nixeville. We called the place Camp Mud. If that was not its name in French, it was an appropriate one in English, for the place was very muddy indeed! 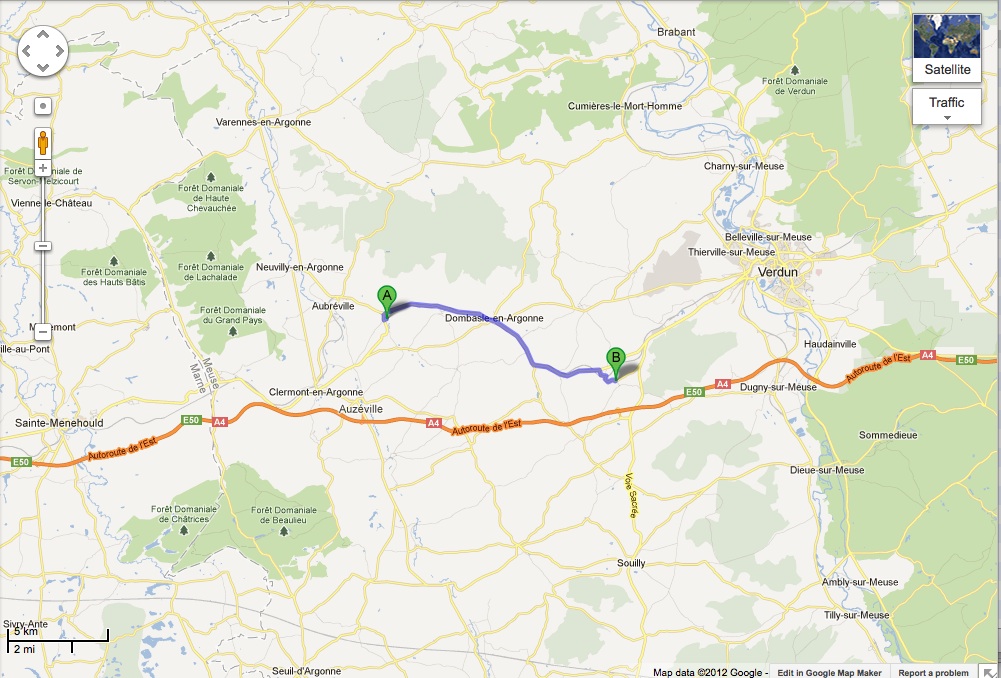 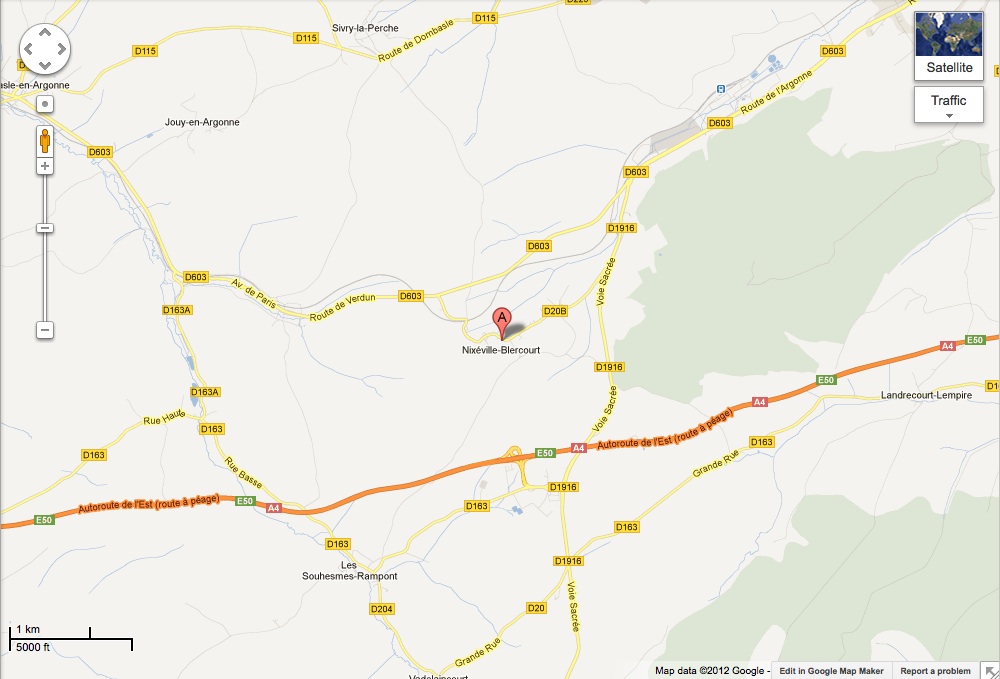 The barracks here were very common. The best feature about them was that they had good roofs. But we did not worry about the barracks, since our stay here would surely be short. We had a number of French soldiers for our company here, and here and there about the camp were to be found various units of Sammy’s troops.

The roads into this camp were very bad. One was very lucky to pull thru them with a truck without getting stuck, and the more one tried to get out, the deeper the wheels would sink.

We were not getting much news from the outside world at this time. Occasionally an airplane would fly over the camp and

drop a New York Herald, Daily Mail of a Chicago Tribune. Oh! How anxious we were to see these papers. Just about like getting letters from home—and by the way we had not heard from home for two or three weeks.

As we moved different parts of our regiment would start first, which necessarily meant that we were very much scattered. On Oct. 4th I was in Camp Mud, but was soon to leave there. I went to a little wood near Germonville Oct. 5th and remained there over night. Here I slept in my pup tent again. I think that name pup tent is a very appropriate one since the tents were first size to shelter a good sized pup. One had to be careful not to play ostrich: with the head covered and with the feet subject to the weather.

The next evening I proceeded to a little hill just about Germonville and there my home remained for two or three days. I hunted about to find a dug out and we my comrade and I finally found one that had been deserted by the French. It was very 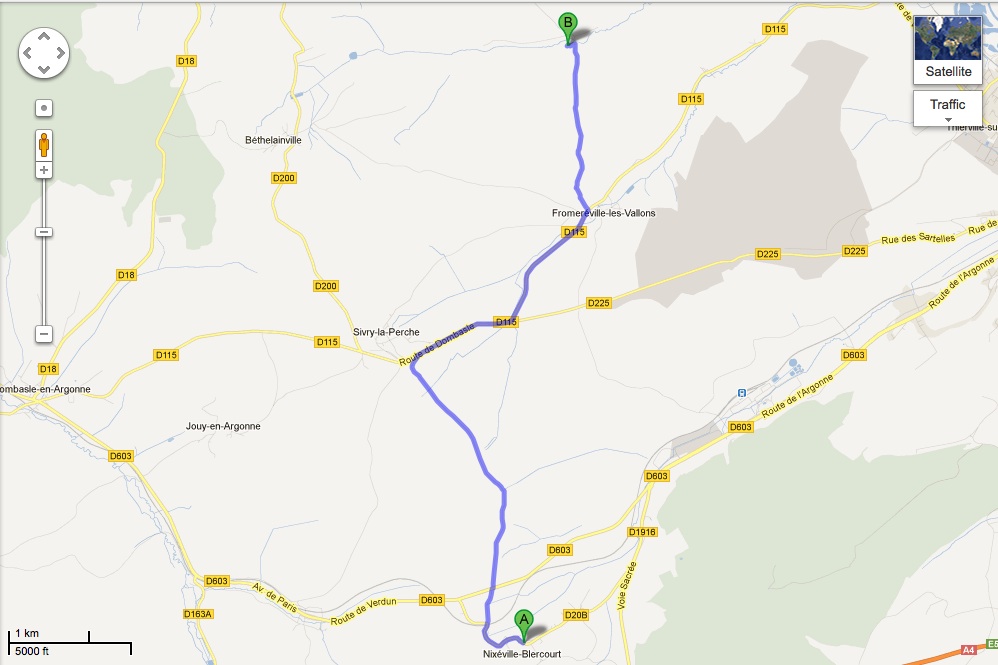 dangerous to sleep out in the open because the Germans were sending over bombing planes every night. During the night we could hear the bombs drop nearby, and the next morning discover how close they came to our quarters.

I never moved unless I tried to fix up some place decent to live in. At least, one could generally find some way out of a difficult situation and  My partner and I were good at that. Here at Germonville just as soon as we discovered a dugout we immediately began a search for a stove and something to make a bed of. We, at last had collected all the necessary material, and were well set, when order came for us to move. One felt that he never would try to make things comfortable again.

I have often wondered why the front remained stationary for so long in places, but after I had studied the situation over together with my experience, I decided that the French and Germans had devoted considerable energy in making their dugouts comfortable, and after all comfort came, they

hated to be disturbed and chased from their pleasant quarters. There must have been a mutual agreement between the combatants in come cases. Who wanted to be chased out of comfortable quarters in the midst of fields.

The Germans certainly did have their dugouts arranged comfortably. Nice chairs and tables, wooden floors and they even had glass windows for some rooms of their dugouts. Of course such places were for officers only. God only know where the privates lived! They were lucky if they lived at all!

In leaving Germonville and going to Marre, we passed many of the big forts, which helped to save the Crown Prince from taking Verdun in his attempt before. These forts were in the tops of hills north of Verdun, and well equipped with guns. 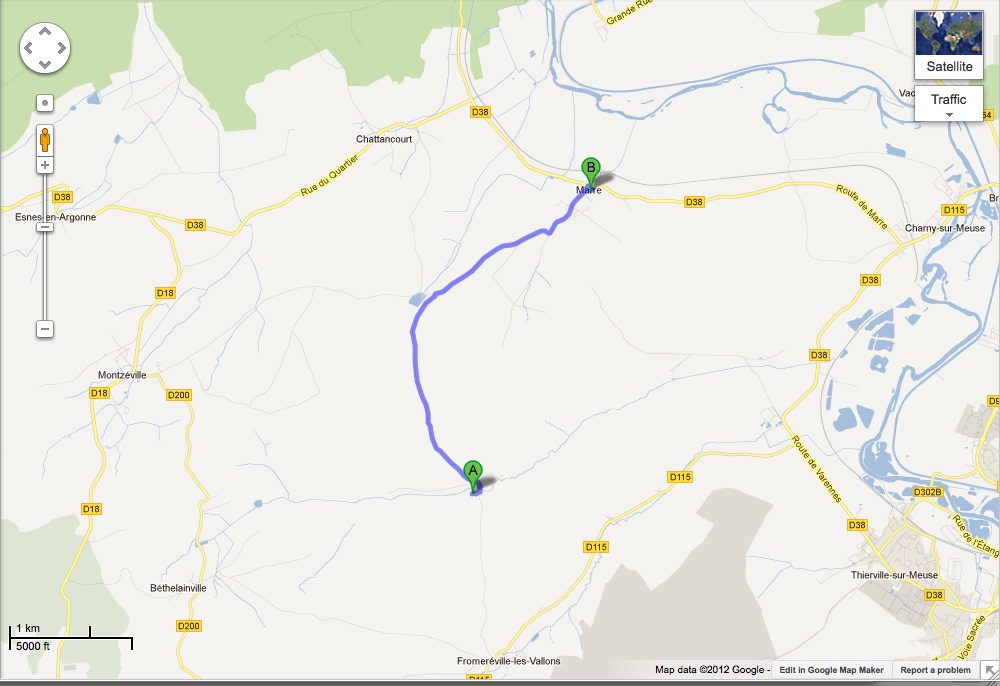 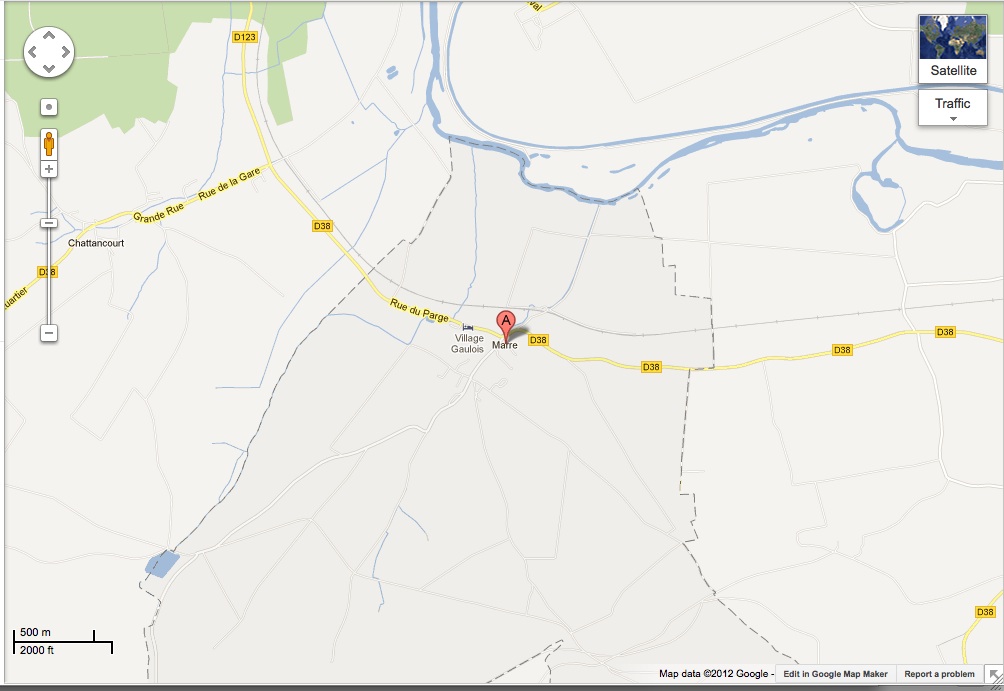 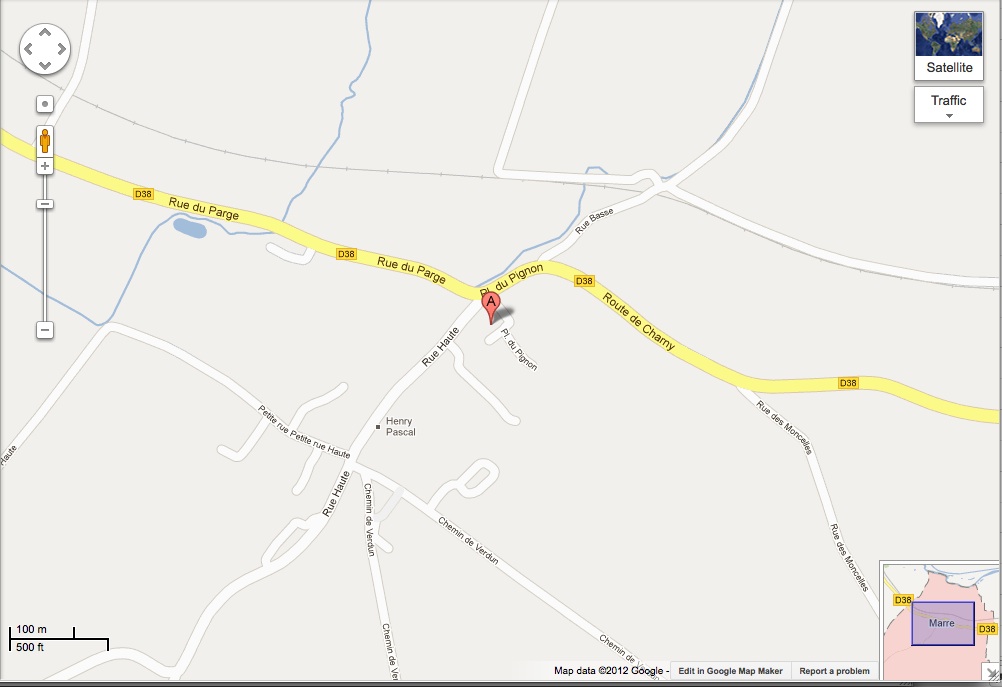 I remember the first night that I spent along the Meuse. I slept in my tent just at the foot of a hill where one of these guns were placed. As they belched forth, the whole valley reverberated with the noise of the explosion. They made a terrific noise and was very much noticeable to a newcomer. My bed was so located just so that the shell

should fly over my head. 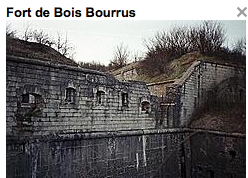 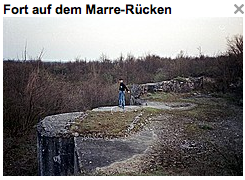 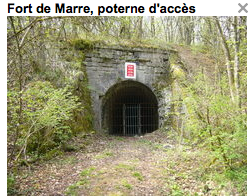 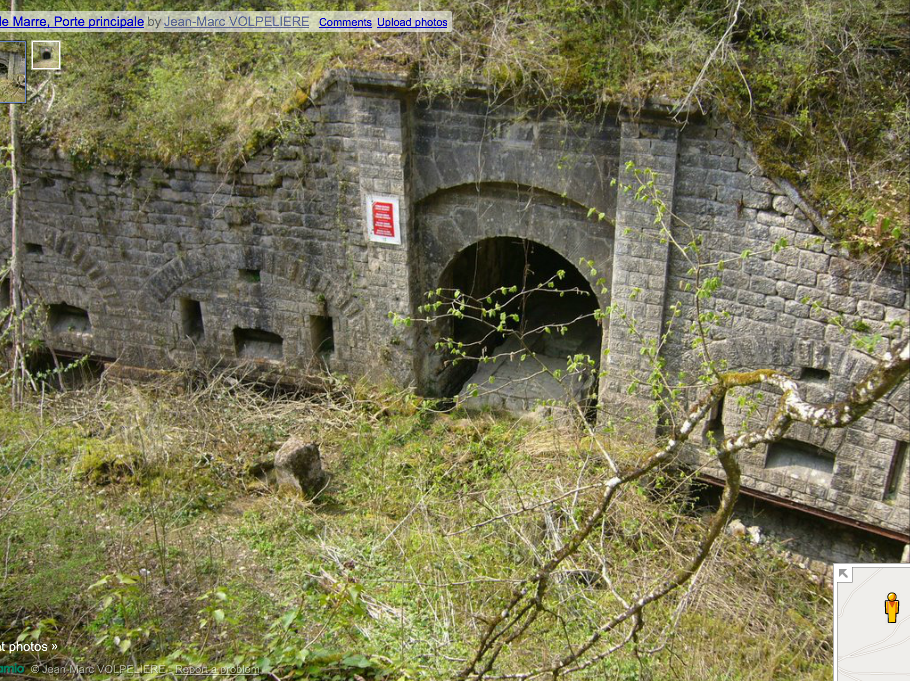 I was amused at one of the boys that night. He was one who had always preached fatalism to me and was orthodox so far as that philosophy goes. This chap slept under a bridge near by, and at this time the Germans were doing some bombing in the vicinity. Furthermore a bridge made a very fine target for a bombing plane and if they could destroy a bridge a good night’s work was done. Well this Hebrew that certainly [knew] that they were bombing the vicinity that night, and he kept all the remainder of the boys awake by his rather loud desires to move to other quarters. “Ha! A fatalist wishing to make a move to safer quarters? Well if that Bomber has your name he’ll get you wherever you are.” Said his companion.

So they finally urged him to remain under the bridge for the night, and he still argued for fatalism.

[This is the last piece of the memoir.]